So yesterday I was really happily surprised as at the end of the day some people of Smart were at the gate who turned out to be engineers of Smart, even though I was very suspicious hearing the word ‘Smart’. And yes, I had had some phone calls just before apparently coming from Smart, but I couldn’t really connect it to anything as I did not complain anymore recently to the customer support or something, although just around that time yesterday I tried to find a way connect to Mr. Llloyd Manaloto whose name came up quite frequently related to my search for people within Smart on the higher levels.

But as far as I remember the phone calls started earlier, so they must have been triggered by something else.

So suddenly there were three engineers from Smart at our gate, something that I believe should have happened long time ago, as especially in our location customer support and installation technicians probably would not be able to find a solution for the problems with our Smartbro internet connection.

And actually that’s what I wanted to start this post with: thank you sir Bryant, RE and Art for making this site visit and understanding what has been going on here and last but not least, probably having solved some problems with the radio signal.

Or problem not solved?

So yes, the problem was solved today. As last night I thought it was too late for the engineers to climb on the roof, even they were willing to spend some more time and effort to make sure I had Smart internet straight away yesterday, which was fully gone the night before. And while writing this that might have been the trigger, that without me knowing Smart is monitoring my connection and could see I had no connection anymore as it seems there is more going on within Smart than I know, probably based on my letters.

Something doesn’t add up

But something doesn’t add up. Or actually two things don’t add up:

Related to the speed see below two images for the speeds I found with a speed test program while writing this post1. 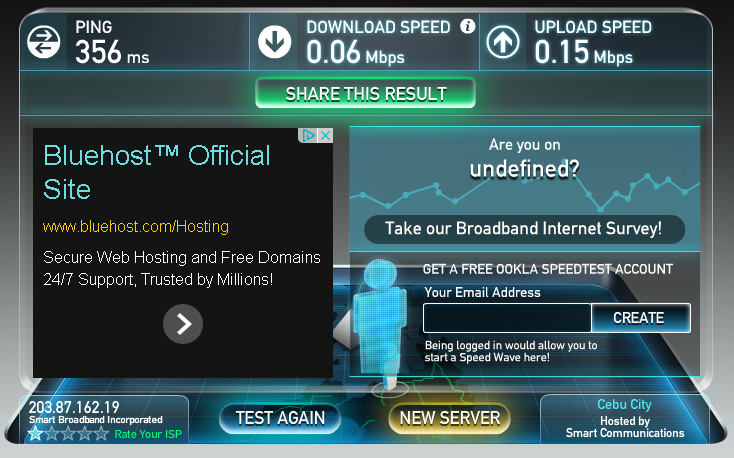 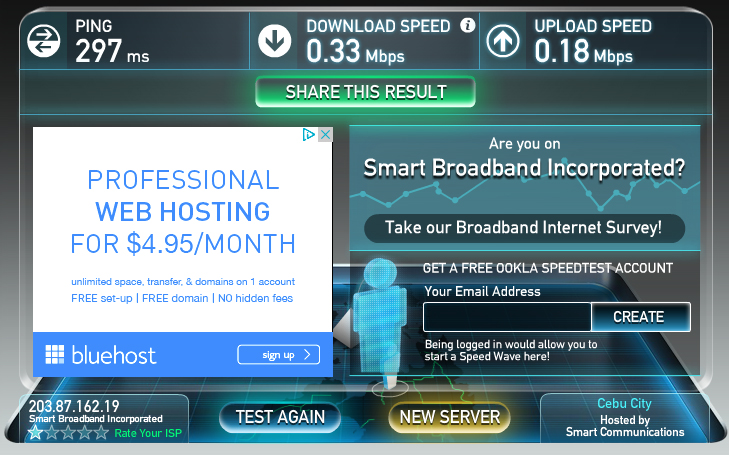 So it seems the effective speed I am experiencing right now is a little less than 512 Kbit/s. Which is far lower than the speeds I experienced after the upgrade until somewhere 2013. And the issue here is that it is quite a bit lower than it was before and also that Smart, or probably PLDT now, is selling.

Well, of course I am happy I have a stable PLDT/Smart internet connection again. But what still worries me, and this was also the whole starting point of e.g. the page Smart/PLDT limited unlimited, is that I have no clue where I stand with all this as somehow Smart/PLDT has changed the rules, especially apparently having applied a volume limit on existing unlimited plans. And they did it without informing me properly. And apparently I am also back to a 512Kbit/s speed where I thought I had 1Mbit/s or 2Mbit/s and also actually had.

And yes, legally I guess they are fully right and safe, although to me a volume limit is a volume limit and not fair sharing of internet bandwidth. But what they seem to have forgotten, and that is also what I was trying to convey to the Smart engineers who were here today, is that they lost my trust and, more important, someone who was really selling them, selling the Smartbro connection I had. As until last year I was a very happy customer who was recommending Smart above Globe to friends and business contacts. But right now, and the last few months, I have been complaining and complaining and complaining and am even writing about all this in a way that may very well damage Smart in the long term. And yes, they may even lose me as a customer, as the Globe connection I have right now is much faster, even though the Smart/PLDT internet infrastructure is better than the Globe infrastructure. Or I may look for something completely different, which I actually already started.

So yes, this whole thing with especially Smart has taught me that Napoleon Hill is indeed right, that you first and foremost need to serve the people, serve your customers, at least if you want to be or become rich. Or stay rich looking at the sample of the Smart Fair Usage Policy.

1Please note this is not a fully fair test as I am running some torrents who appear to have upload speeds of around 20Kb/s.