I was writing my post finishing things and wanted to include some stuff about my ‘savings box’, but I felt it didn’t belong there. And I am not fully sure where the contents of my ‘savings box’ finally will go, as I did not set a specific goal what to do with the money I am ‘saving’ in that box. I do know that that box and the money in it, helped me with discipline and thinking about growing money, even though in real life nothing really changed in my financial situation recently, and then basically I am thinking the last five or ten years. 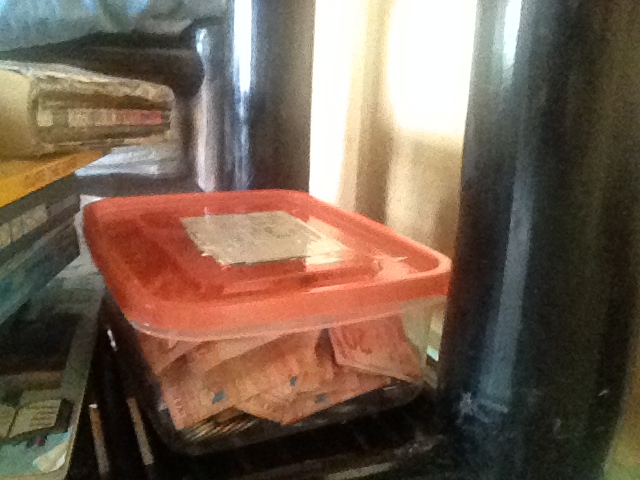 But my ‘savings box’ is intended to change that, or at least help me change it. And you may want to know I started that savings box when I felt financially fully bankrupt, like not even knowing how to get the cash to pay my food, the dog food and other household stuff everybody needs to live, or at least survive.

And it is weird to realize that from that very bad situation, when I had the feeling I had nowhere to go, didn’t know how to survive the next week, I started my savings box. As in that situation I decided to implement what I had read in many places, to put ‘always to put some money aside (from your income)’. And together with learning about discipline and persistence I decided to put one peso (Philippine peso) in a box every day. So I found myself a box, put it next to my bed and put one peso in it, as, strangely enough, ‘one peso’ was still ‘nothing’ for me at the time (what about perception). And ever since that time I have put money in that box, every day.

Update January 24, 2016: strange to see the “twenty pesos every day” as for quite a long time, months, maybe half a year or a year, I increased the amount do fifty pesos a day, even though right now my financial situation is certainly not better than when I started or when I went from twenties to fifties. And part of the money was taken, almost all twenty peso bills, maybe quite some fifties also, I guess I could call it stolen, but the coins are still all there I think and also quite a lot of fifties now, so in the end doing something continuously, every day, seems to pay off, although I still don’t have decided on what to do with the money, what would be the right time to use it, or for what. But I guess time will tell.

And recently I am tight on budget again, so I thought I wrote on the box ‘only use when needed’ to prevent especially other people getting any money from it, unless someone would really need it. But I did write something else: “please do not touch until the right time”. And that made me think recently, and yes it still would allow anybody to use it if they feel it is the right time.

I started anew as after several times money taken, stolen from it, my Savings Box was taken away fully. Read more on Savings Box Restarted.