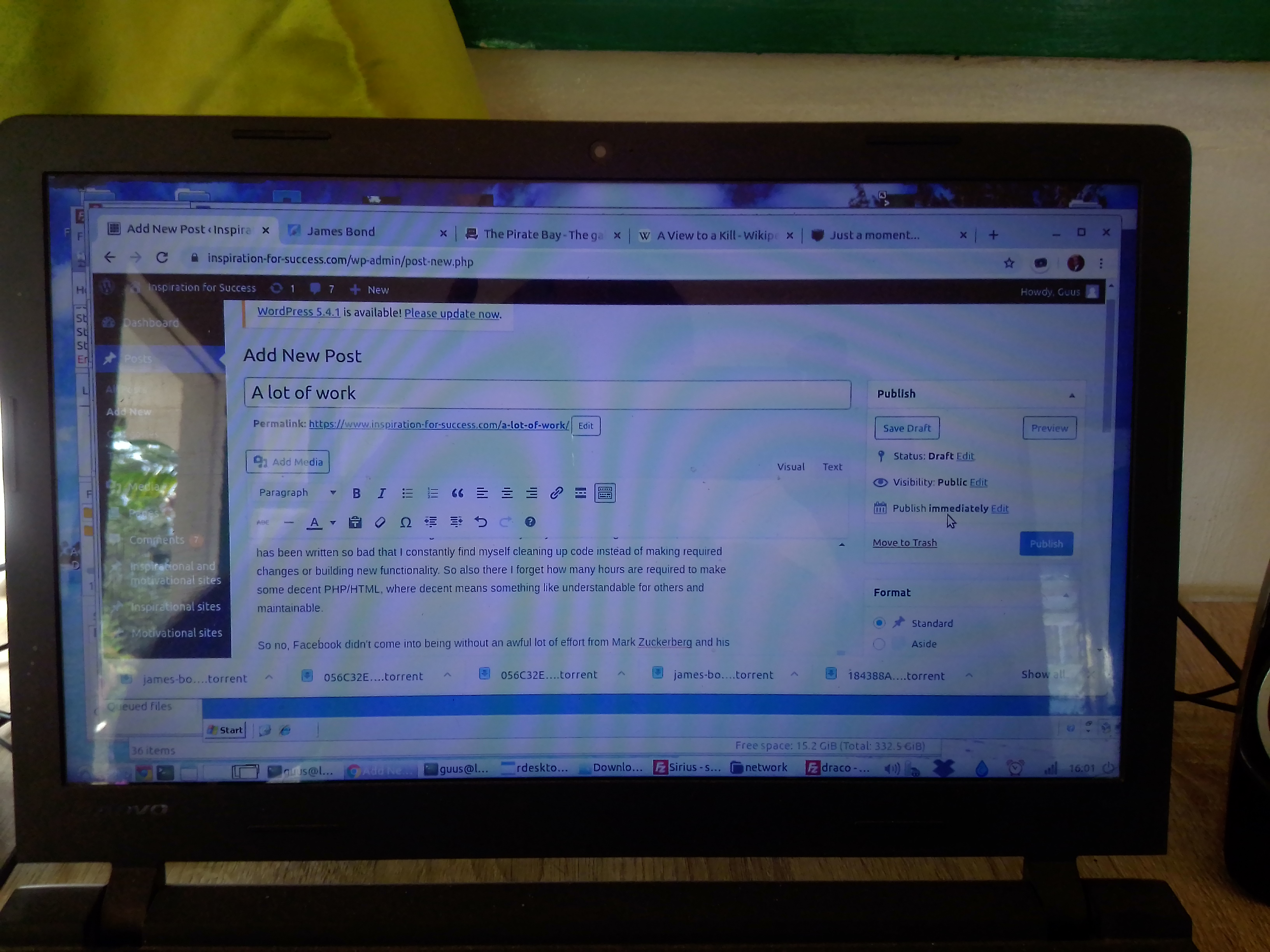 I am working on my James Bond Torrent Page and I started to realize that a lot of things are just a lot of work. We are so used to having all kinds of things available to us in a relatively easy way that we often forget how much work and effort goes into a lot of things. Like it seems so easy to me how Mark Zuckerberg e.g. built Facebook and how Google, yes, who actually did it?, built Google. And yes, how I built this site e.g., and built many other sites.

And recently I felt a bit guilty towards a customer, as I have been spending quite a lot of time cleaning up (the code of) his site. The original developer couldn’t support him anymore with his site, so I offered to take over. And I thought I could relatively easy fix some things in that site, but the code has been written so bad that I constantly find myself cleaning up code instead of making required changes or building new functionality. So also there I forget how many hours are required to make some decent PHP/HTML, where decent means something like understandable for others and maintainable.

So let’s be a bit more grateful to the people supplying us with all kinds of things. And realize how much effort goes into even the simplest things, like also the food on our table and all the stuff we have around us.

So yes, many things are cheap and relatively easy to obtain, but that is only because so many of it is being made or so much is being used. As then the numbers count and (development) cost are spread over many people.

Today was a bit a strange day as I just came back from a short holiday yesterday, but I felt I needed some time for myself as the holiday felt kind of mandatory because my partner decided to celebrate his birthday somewhere else, so I felt obliged to join him there to be there for him.

So after all my obligations before my ‘holiday’ and my ‘obliged holiday’ today I finally decided to have a day off and not do the things I planned to do like starting work straight away, even though I did some little things that one could consider work.

And it was strange when somehow I started playing music, something I do sometimes if I want to have some time for myself. And it made me happy as it mostly does. So I continued playing music and shared a bit of that on Facebook.

And probably I will continue working again tomorrow, but thinking right now I may just postpone that a bit more. Until it really feels good.

Question 3 in the self analysis questions is “Do you frequently make mistakes in your work, and if so, why?” is a question I never really understood as I didn’t believe I made so many mistakes, but recently I noticed that while programming I often use some kind of trial and error message and while starting this post right now I realize I made lots of mistakes, big mistakes, otherwise my business would be thriving right now and not technically bankrupt.

So maybe there is some more to this question than I initially thought, maybe especially thinking of the small programming mistakes I make, at least for now. The large business mistakes I think I need to think a bit more about before writing about them or analyzing them properly.

So how I use it is kind of write or change one or a few lines of code, then see if it works and then repeat the process. And apparently that is the fastest way, at least for me, to develop code, to develop the stuff I am making the things I am good at. But with this question in mind and with the idea that I was taught to do something right the first time my method of developing software, my working method appears to be a bit strange. As most code I write has many errors the first time, which I just solve by testing the result and solving the errors.

And thinking further my way of programming is also very weird, as normally one makes some kind of design, preferably written down and discussed with the customer, where I just see the thing I want to build, am building in my head, through my imagination, at least the structure, and then just build it. And recently I read a book about cognitive science and when reading that book I realize I build software, websites, web applications as an expert, as I can’t tell you or anyone else how I do it, I just do it, I just ‘see’ in my head how it is supposed to be and then I build it.

So why do I make so many little mistakes, and also bigger mistakes, sometimes kind of fatal (programming) mistakes that sometimes show up much later, where fatal means that customers or website users would see them.

Well, I guess the why is that I believe that it is the fastest way of building the stuff I make. Or the most efficient. Or the cheapest. As I can type fast and program fast and with that fast pace it is often the fastest way to accept errors and correct them after testing, after checking if it works or not.

But anyhow, the question made me think about the enormous amount of typing and small programming mistakes I make. And that is okay, as it works for me. But right now the question is triggering another question: if I also make so many mistakes in other areas of my life and if that would also be acceptable or the fastest way.

So that is something to think about further, analyze further. But not now.

Thanks for reading and of course comments are very welcome as usual.

I was a bit hesitant to click ‘new post’ as I have no clue what to write right now. Related to this site my mind is much more to finishing the inspirational and motivational sites pages than writing posts. And I should(?!) take a break and do something fun, but actually I am quite happy working on DoctorsConnect, my new project. And I am still working on the new site for the SEMP Association, but that took and is taking a bit more time than I expected.

So well, yeah, quite busy with things, but it would have been nicer to also work on some real customer stuff (the SEMP Association site I do as sponsor) to have some more budget for fun things, but well, if it isn’t there it isn’t there and it gives me the time now to focus on DoctorsConnect and I think I came quite far with that already, as the whole foundation is there already and it’s pretty stable. The difficult part (for me) may be to make it a bit (or a lot) more user friendly, but in the end I think reliability is very important, even though I have learned that ‘time to market’ is also very important.

So well, we’ll see, but I have the feeling I am quite close to have a first version of the system ‘in the market’ soon. And that makes me very proud.

Well, not really inspired to write a post right now. But I did work on the page Top Inspirational Sites, as that was something I planned for today, to add at least two inspirational sites on that page. And I did. And the main reason for that was that that page is the most popular page on this site. So it seems there is some demand for lists or evaluation of inspirational and motivational sites. So maybe that would be a breakthrough for this site, like also making some kind of ranking system based on the opinion of users. Something like a voting system. Should not be that difficult to program, but somehow I am also a bit tired of programming for this site, as nobody seems to be using the inspirational tools I have developed a while ago.

But yes, success seems also to have something to do with persistence and doing things you don’t like or something. So maybe I’ll work on some kind of voting system for inspirational and motivational sites. Yes, maybe just plan it.