I am mainly frustrated because I don’t have, or think I don’t have what I want. Or maybe I am mainly frustrated because I don’t know how to get what I want. But I think I never really wrote down what I want in a tangible way. Like mostly I say something like “I want my old life back, but in a better, more healthy way”, but I never really specified that I think. And with “my old life” I mainly mean the life Lee and I had together from 2003 to 2010 or so. But I also mean part of the life I had before, when I traveled the world together with Nico. As yes, that was fantastic, even though there was an underlying problem in our relationship most of the time. And the same was true in the time I was with Lee. I was happy and in love and we had a good life, but some things were wrong, very wrong I know now. And I guess it was the same or a similar thing going on. And I guess it goes back to codependency and to not loving myself and not having a spiritual foundation I could build from. And as I have been working very hard on the last I may be much closer to what I want than I think, even though it does not feel that way. Actually I feel worse than ever in my life before, even though I had a very bad time when I was a student, also being very depressed and suicidal. I remember driving on my 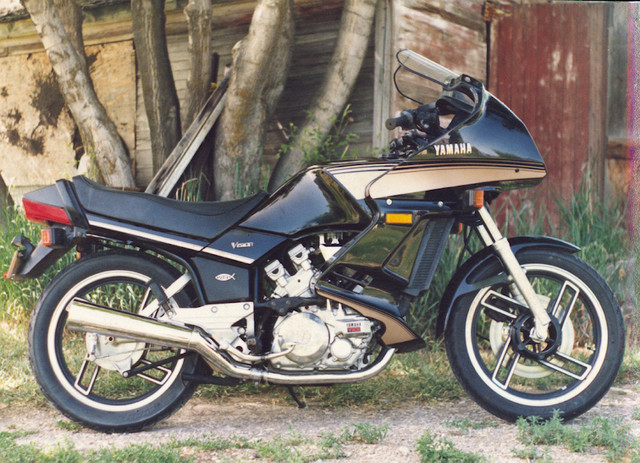 Yamaha XZ550S and thinking with almost every truck I encountered whether I would drive into it or not. Well, somehow I didn’t, and I still don’t know why, as it would have been so easy.

And thinking of that bike, riding it was really fantastic. It was the best thing I ever did and I still miss it. And amazing I did not kill myself with it at the time, as I was young and could drive pretty fast most of the time on ordinary roads in The Netherlands, like 150 km/h, yes, really, 150 km/h on average country roads.

And yes, I consider myself a safe driver, not really taking risks, but 150 km/h on country roads, even good roads, is pretty fast, way too fast looking back, but I did it, and I never had an accident at the time. And I guess that is amazing, looking how much I used that bike as it was also my daily means of transportation, going anywhere I wanted and needed to go.

And I realize now that at the time nobody really knew me, how I enjoyed that bike and also how fast I drove and such. I guess at the time I was also already pretty alone, pretty lonely, very lonely.

But that is a sideline, although it brings me back to what I want, and also to thinking about how it all happened, why went down the drain so far and so deep.

As at the time I was very lonely and was already looking for a lover and partner I could not find. But what I had was safety, basically in the form of money. And some kind of outlook to the future as I was studying at the highest level University in The Netherlands and was supposed to get a good job after I was finished. And yes, maybe I was spoiled, getting Dfl. 1,000.00 per month as study allowance from my dad. And I got Dfl. 10,000.00 savings on my 18th birthday or something. Or my 21st , I don’t remember.

So that is what I want, feel financially safe again, as at the time I felt financially safe. Every month Dfl. 1,000.00 was deposited in my account and I had a few thousand guilders as savings. As right now I feel completely unsafe financially, as I don’t have enough money coming in on a monthly basis to sustain my current lifestyle. And my current lifestyle may be still pretty high, but it does not feel like extraordinary, especially not related to how I lived before, until 2001 or so.

And strange, writing this, as it seems financial security is the most important thing for me in life. As yes, I used to want a regular sex life, preferably, or actually only, through having a lifetime lover and partner, but I am pretty sure the last can be found if I am financially secure, if I feel financially secure. As, and I never realized this before, money CAN buy some kind of safety, some kind of security, some kind of feeling secure and safe. And I still believe if I would have been able to earn enough, pull of Active Discovery Designs in a way it would earn enough money to sustain our lifestyle, Lee would still be with me, would not have left me. Shortage of money, financial insecurity, seems to be a very bad thing, at least for me.

What would I like to change, what would I want to be better? Well, this I guess:

Ah, and my codependent treats come out so well making above list, as I often want to write ‘we’ instead of ‘I’, for things I did.

So what do I want, summarizing the above? Well, this I guess:

Recently I have worked a bit from the “Your Best Life Now” journal from Joel Osteen and the more I read all this ‘self help’ stuff the more I realize it’s all the same. Today I encountered day 1 from Step Three (Discover the Power of Your Thoughts and Words), which basically is nothing else than the message of Napoleon Hill in his book Think and Grow Rich that was a main part of the foundation of this site and the project Inspiration for Success. I presume it even comes from the ideas of Napoleon Hill as the key truth for today he states is:

“When you think positive, excellent thoughts, you will be propelled toward greatness.”

And reading the chapter many ideas are similar to what Napoleon Hill states, even though they are stated in a Christian way.

And yes, reading all this stuff and signing up for ‘self help’ type websites, partially for research for this project and applying all these principles and listening to audio’s and applying all kinds of principles is starting to make me feel uncomfortable. Because nothing really changed in my life, actually recently it kind of got worse somehow, especially business wise, even though as a person I feel that I still grow. And apparently I’m not the only one who is in need or hooked up to all this self help stuff, otherwise this ‘self help industry’ wouldn’t exist.

And don’t get me wrong. There is nothing really wrong with how ‘self help sites’ work, first ‘being found’ in a specific way, then asking for an e-mail address and then sending daily or weekly message. Although I am starting to be turned off with all the implicit selling that’s being done. So yes, that’s how the industry works. And it means its industry. And I’m starting to get more and more convinced something needs to change in the way we have organized our world as you also may have read in other posts and pages of me. As I think humanity can do better than ‘industry’. And ‘industry’ is everywhere, it’s how the world works, it’s how we get our daily food, it’s how we are entertained, it’s how our cars and refrigerators and all our other stuff is being provided to us.

But it doesn’t work like that for everybody. It works most for the people who ‘fit’ the system, but it doesn’t work for large groups of people, at the moment even including me. As the whole system is based on money in some kind of greedy type of way. And there is nothing wrong with that. As that is the way how the system came into being, how we all, literally all, benefit from food being available and medicines, yes, also for many poor people I guess. And for being able to move around with cars or motorcycles or public transportation.

But somehow I think we can do better. And I don’t know how, as money indeed is a convenient means for the exchange of services and goods. But somehow money has become a goal in itself, and it has been already for a long time I guess as also the bible states things like money should not be treated as a God or something. And the recent financial crisis, that has been going on for years now, is some kind of signal that we may want to move forward to a better system. And I don’t know how, but I’m quite sure humanity can find a better way to provide humans with their daily and not so daily needs and wants.

So I’m looking for ways to let you really benefit from this site, this project. So you would really get and achieve what you want. As somehow these sites and books and courses and, and, and don’t seem to work. Otherwise it wouldn’t be an industry. Or would it?