﻿ Seems I am starting to learn 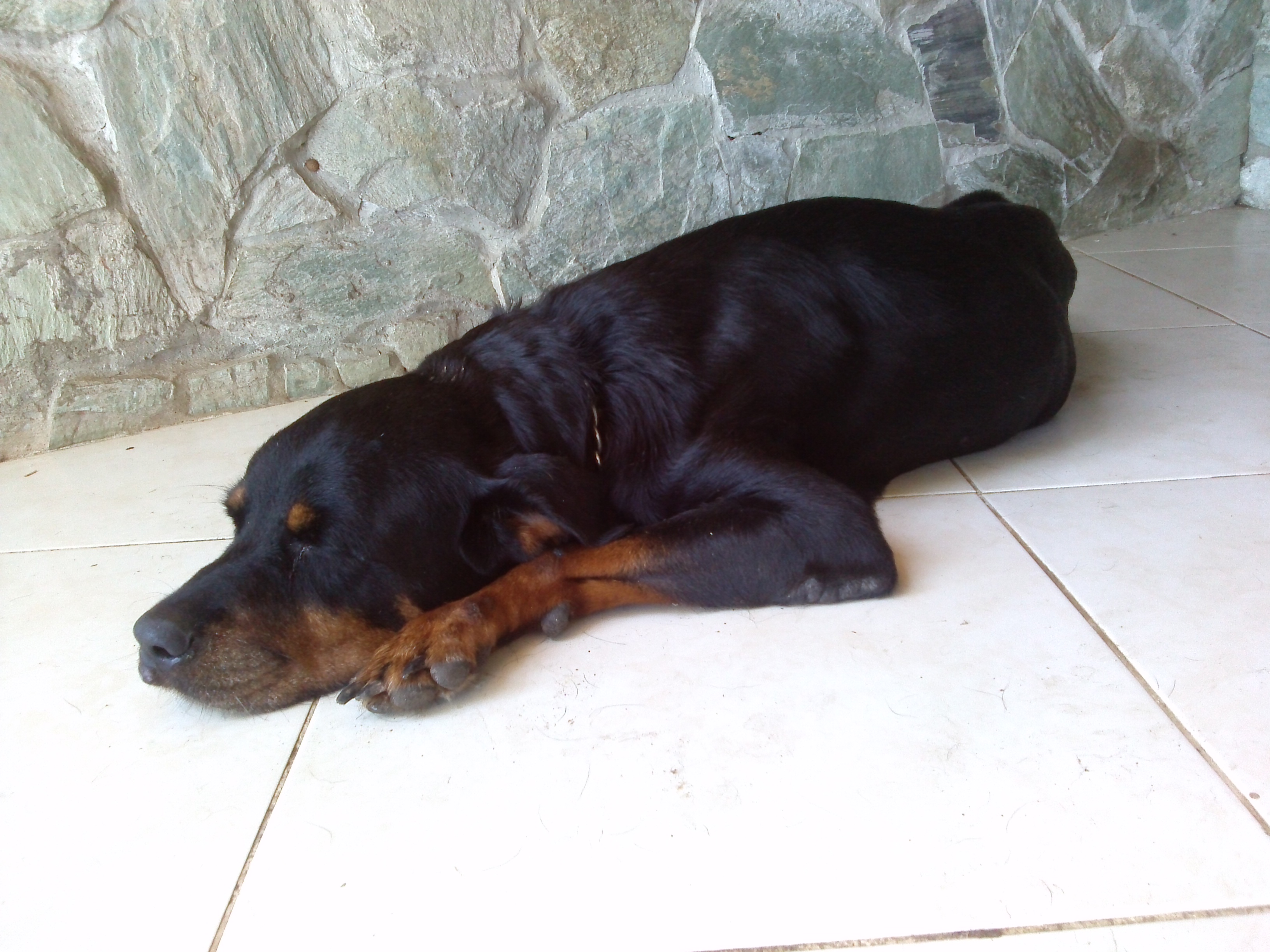 Today was a very emotional day for me, as one of our dogs was (and is) very sick and I was quite affected with it and didn’t know what to do. And there is quite some history to this, as quite some years ago I was confronted with a very sick also and I felt wrongly advised by the vet, resulting in a dead dog, a dead puppy of maybe 2 or 3 months old. And I was very angry with the vet, as they hadn’t advised me properly, and if they would have, the dog might not have died.

So I saw myself confronted with another dog with a similar problem, not being able to keep any food or fluids in her stomach, which was the same problem the other dog had, and not really knowing what other vet to go to, as somehow this is still ‘our’ vet and probably still the best known vet in Cagayan de Oro City.

And I don’t have any money and we don’t have a car, so it’s a lot of hassle to bring a sick Rottweiler to a vet. And she really looked sick and she is already something like ten years old, so last night I kind of gave up on her already and was wondering if I would see her alive this morning. But she was still alive tonight and even moved to another place a few meters away while she could hardly walk and she looked pretty okay this morning (see photo). And she still tried to eat, although she didn’t want to drink anymore, but it was very frustrating to see that it all came out again. Somehow here digestive system couldn’t process it anymore.

So this morning I felt pretty bad and didn’t know what to do and I had no feeling whatsoever of Infinite Intelligence or God or a hunch or whatever one might look for when one is lost, so I just waited and lie a bit on the couch and just checked on the dog again and again not knowing what to do, basically waiting for her to die.

And yes, I was kind of sending prayers out to God or The Universe or whatever to give me some answer, as I really didn’t know what to do and had no feeling about it. And no, no  answer came.

Until, somehow I posted a message in Facebook (with above photo) sharing my feeling of being lost an confused, not expecting anything.

And then, somehow my prayer was answered. As when I checked later I saw the post got quite some comments, some of them urging me to go to a vet NOW. And I didn’t get the answer fully yet, as I asked for help, help that didn’t really come in the form of someone offering to bring me to the vet in his or her car.

And then, somehow I went to Ulla and saw her eat the baby food we gave her again and again, trying to somehow keep it inside, which she didn’t manage. And then I knew it was time to move, indeed get a taxi and just bring her to the vet to figure out what was wrong with her, as somehow she hadn’t given up on herself, where I was not sure whether to give up or not.

And looking back it was indeed some inspired answer, something Infinite Intelligence, as I just knew what to do and that it was the right thing. And indeed, as indicated in Law of Attraction stuff, somehow things started to move by themselves. I informed the vet she didn’t need to come to the house anymore, which I had requested before, but what didn’t happen. And apparently for a reason, as looking back I would have needed to go down to the city anyhow. And a taxi was quickly found and soon we were on the way to the vet. And the vet just did her job and analyzed what was going on and sent us out for x-rays (strange, didn’t know that was also done with dogs). And everybody was just helpful and tried to figure out what was (and maybe still is) wrong with her. And I also knew I had to leave her behind, something I kind of dreaded, as with the other dog the next day I just had to pick up a dead dog and had to pay a pretty large bill.

And it was relatively easy to do all those things and to trust all those people and Ulla also seemed to know, as even on the x-ray table she wiggled her tail and seemed pretty okay. And it was strange to see and know that the helper of the vet still knows Ulla and he just joined us to the x-ray venue and carried Ulla on his own (as I try to avoid carrying because of my back injury and our helper that I asked to join seemed not needed for carrying her).

And the hardest part, leaving Ulla behind, as I wanted her to be on IV, wasn’t as hard as I expected and Ulla seemed pretty okay in the cage alone with the other dogs. And no, of course this may not end good like her having a real big problem with her intestines, or she may just die tonight. But the last I doubt as she is looked in pretty good shape and alive, especially after receiving the IV fluids, contrary to the other dog, but everything just felt right.

And this all made me think of learning from mistakes, one of the self analysis questions, and I think I learned a lot, even though I thought I was making the same mistake again. But I didn’t, as this time I didn’t wait so long before taking charge. And I shared with other people what was going on. And I took responsibility for all the decisions I made (and didn’t and probably won’t blame the vet for anything).

It was a strange day today for several reasons. The first was that I skipped my Inspiration for Success activities last Saturday, something that happens rarely. And I could have done it relatively easy, but I just didn’t feel like it, set some other priorities. And I felt a bit bad about it, but somehow when I was out with friends Saturday evening I decided that was more important. And when I came home I decided that it was just too late or that I was just too tired or whatever.

And I am a little bit worried about it, as recently it happened a few times that I didn’t do my daily Inspiration for Success things as I am scared that I am not disciplined enough anymore. And there may be some truth in that, but I also know that sometimes, or maybe even often, I am overdoing things.

The second reason for today being a strange day was that I felt pretty sick again. Not really sick like the beginning of last week, when I really felt like having fever and needed to rest, but my head just feels like being filled with cotton buds or something and I can’t(?!) really keep my mind focused on things like work; or writing blog items.

And more reasons I don’t really know anymore as I just feel too sick, too lousy to continue with this post. So let’s just call it quits and do better tomorrow.

I am a bit lost and confused and annoyed as DoctorsConnect is not really being used yet and as I am a bit sick, even have a headache. And my stomach is also still complaining as it lately often does, with a feeling of too much acidity.

And I was just lying down a bit and still thinking about forgiving and what James Altucher wrote about choosing to do the wrong thing, something I read yesterday or a few days ago. And the last came from my Dutch post of today, where I wrote that I choose to stick with wanting a lifetime monogamous relationship with my current partner, where I more and more believe that it is not wise or not practical to combine your sex life with a life partner. But it’s just what I want, even though I now believe it is wrong wanting that. But I decided that long time ago and I just want to make that work.

And while writing this post I got completely lost in some other things, like working on the pages Top Inspirational Sites and Law of Attraction. And I also noticed something changed, today, or maybe the last few days. And I don’t know what it is, but it seems something outside of me. And somehow ‘it’ decides whether I can move or not, should move or not. As when I am down like I was the last few weeks, or at least much more down than I usual am, it seems that no matter what I do, it just doesn’t change. And somehow, some time, whenever I have this feeling of desperation when nothing seems to move, things start moving again. And I still don’t know what it is and if I can influence it. Apparently not, even though I also experienced that your mindset can change your experience.

And yes, I realize I’m writing a chaotic post right now, as next to ‘forgiveness‘ and ‘wrong’ I now added things like Infinite Intelligence and mindset.

So maybe for now just stop and let all of this sink in. And continue tomorrow or something, but I know my posts, my blog is kind of impulsive. And yes, I can add another subject now, as I am wondering if I would be able to find an audience, build a community, around the stuff I am writing, the stuff I am writing my way.